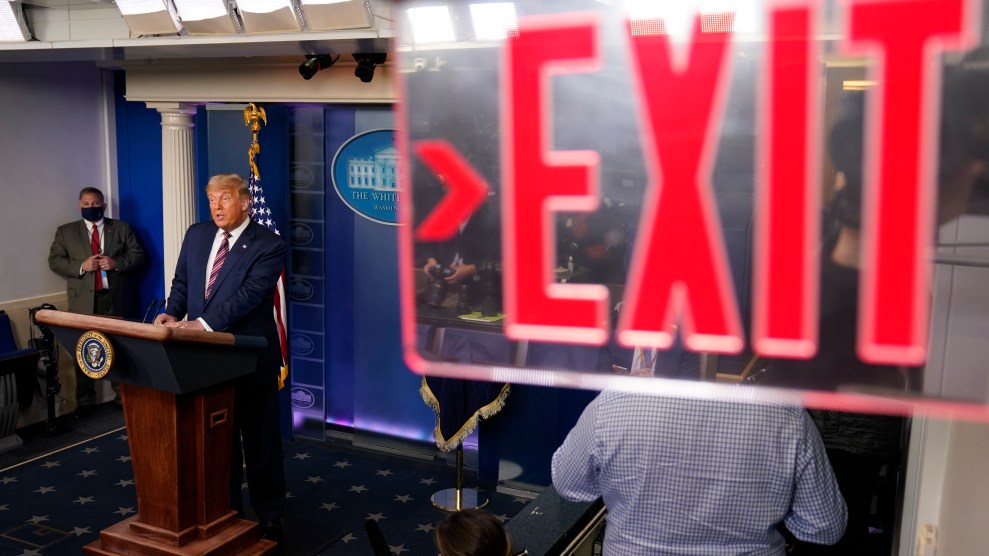 To call the speech President Trump gave at the White House Thursday evening a “news conference” wouldn’t be right. For 17 minutes, he repeated dangerous lies about the legitimacy of the election results—claims so outrageous that even the conservative New York Post called them “baseless.” Fox News anchor John Roberts noted that the president we saw tonight “believes that at the end of the day…the election is not going to go his way” and is trying to plan an “alternate route” to retain the White House.

“If you count the legal votes, I easily win,” he began. “If you count the illegal votes, they can try to steal the election from us.” To be clear, there is no deadline by which votes must be counted, and a person is more likely to get struck by lightning than to commit voter fraud. The president is, again, lying.

Donald Trump just opened his afternoon press conference by declaring, "If you count the legal votes, I easily win."

This is not true. pic.twitter.com/coxlQFkjwu

Trump also claimed that he won the state of Pennsylvania, which has not yet called a winner. His margin of victory in the state did get “whittled down”—his words—following the initial reporting of results, but that’s because the state is still continuing to count mail-in votes, which have largely favored Biden. And it’s no wonder mail-in votes aren’t a boon for the president: Trump has spent the last several months trying to delegitimize mail-in ballots, which offer a safer alternative to voting in person amid a pandemic.

Trump, calling mail-in voting "one-sided," claims he won both the states of Pennsylvania and Georgia. (That is not true.)

"I won Pennsylvania by a lot," the president falsely claimed. "And that gets whittled down." pic.twitter.com/Vk0lMGuWQQ

After he wrapped up, Trump refused to take questions from the press, slinking out of the briefing room:

“Are you being a sore loser?” — @Acosta asks Trump as he exits.
(Note: Trump’s exit is the only clip of that lie-filled speech we will tweet.) pic.twitter.com/MS8TdICwZM

Trump’s comments are as dangerous as they are dishonest—a sitting president attempting to undermine the legitimacy of an election while votes are still being counted is unprecedented in United States history. CNN’s normally understated Anderson Cooper summed it up: “That is the most powerful person in the world, and we see him like an obese turtle on his back flailing in the hot sun, realizing his time is over, but he just hasn’t accepted it, and he wants to take everybody down with him, including this country.”