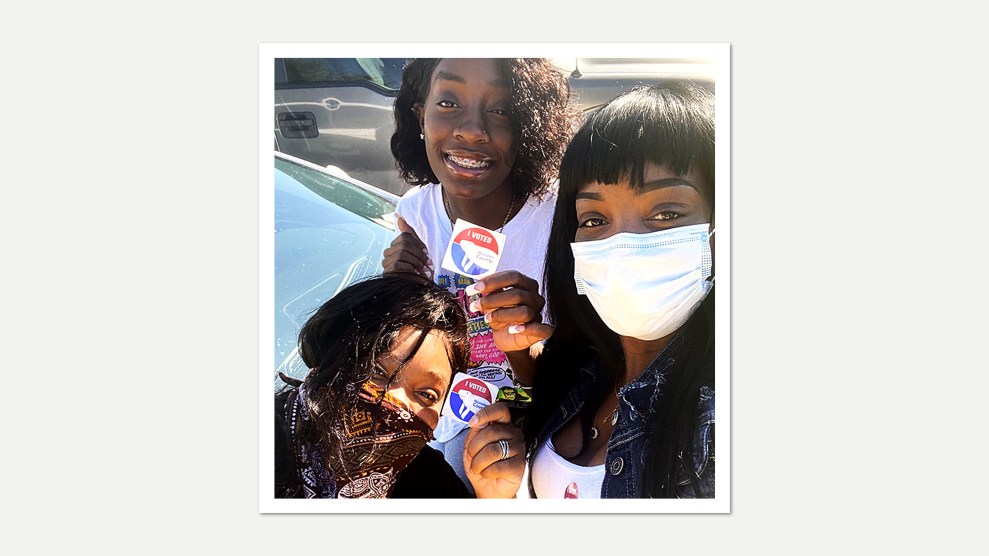 LaToya Moreland’s attempt to vote for the first time in 12 years was an emotional roller-coaster. The 39-year-old mother of four is a lifelong Florida resident, but she’d been prohibited from casting a ballot because of her felony record. Then, in 2018, citizens in her state approved Amendment 4, a measure that activists hoped would restore voting rights to more than 1 million people with felony convictions.

The triumph was short-lived. The next year, Florida lawmakers passed a law stipulating that people with felony records could only vote if they’d paid off all the fines and fees associated with their convictions—and Moreland simply couldn’t afford what she owed. So she and a small group of other Floridians sued, arguing that the new rule was similar to an unconstitutional poll tax. In September an appeals court narrowly ruled against them. Florida Secretary of State Laurel Lee assured voters with felony records that they would not be removed from the rolls before the election, since more time would be needed to fairly handle that process. But she said anyone who knew they had lingering fines and fees should abstain from casting a ballot. That included Moreland.

But, after sympathetic celebrities donated to help Moreland tackle her debt, she made it to the polls today in Bradenton, Florida, with two of her daughters in tow. It could be a close election there; her county narrowly favored Donald Trump four years ago. I caught up with her after she cast her ballot, as she held back tears of joy. Here’s her story, in her own words.

I’m not gonna even lie. When I woke up this morning, I was sick. I don’t know if it was the nervousness of being able to go vote. But I woke up with my stomach all nauseous.

My daughters and I went around 8:30 or 9 this morning. We drove to the local church, and along the way there were a lot of signs everywhere, for everybody, but more Biden signs down this way. I wanted to vote in person because I haven’t had my right—I was so excited to exercise my right to vote. And I’ve been following everything so close: A lot of stuff is going on with the mail-in ballots. And I just did not want to take that chance.

Oh, I was nervous. Because when I got there, that guy took so long looking at my ID; he was saying I looked different. By the time he was finished, my daughters had voted already. But other than that, everything went smooth. They had people in different areas of the church for people who needed help. And they had the sample ballot in case you weren’t aware who was on it. After I finished, I took a picture with my daughters and posted it on Facebook. I was so excited; words can’t really express it.

This wasn’t my first time voting. I’m 39 and have lived in Florida my entire life, and I was able to vote in 2008. But I’ve had my felony since 2011, for possession of a controlled substance, and it prevented me after that. So when Amendment 4 passed, I registered immediately. It was important to me because, being an African American, we go through so much. Because our voice was nothing. We couldn’t say stuff, or we couldn’t voice our concerns. Our ancestors and women around the world, before our time, fought to be able to vote. So it was really important for me to go out and say, “Listen, my voice may not mean much, but I’m gonna make sure somebody hears it, and I’m gonna make some noise until somebody does hear it.”

“Being an African American, we go through so much. Because our voice was nothing.”

I had registered and they sent me the card and everything. And then [before the primary] I got a letter stating that I couldn’t vote. I was able to find out that I had fines and fees from my conviction—they said it was around $900 in total. If I’d had the money, I would have paid my fine. I just, I didn’t have it. I’m on a fixed income. And it’s really hard for a single mom of four, two being in college. I used to do hair, I’ve done cosmetology, but I’m disabled now. My income is so tight that I don’t even have spare money to go buy a soda, you know, after I pay my bills.

When they passed Amendment 4, everyone thought that if you were a convicted felon that you were going to be able to vote. We didn’t know there’d be stipulations. And it was very confusing.

[When the court ruled against us] I thought that we were over. I just knew we weren’t going to be able to vote unless we had the money to pay the fines. I don’t smoke, I don’t drink, so I just cried. I talked to my kids about it, and they said, “Something good is gonna happen. You’ll be okay.”

And as it turns out, somebody paid off my fines and fees. If I’m not mistaken, when the lady spoke to me she said LeBron James and Michael Jordan were paying some people’s fines, so I’m guessing they did. They paid everything. I found out recently in a phone call. I saved the voicemail. She was saying that this was so and so from the Florida voting rights organization, and they paid off my fines and fees. I was like, I can’t believe it. It’s really real.

The biggest race I was passionate about was the presidential election. I’ve been following this thing for so long and they both say good stuff. But then you’re acting like a kid on national TV, arguing back and forth. So that kind of made me wait to the last minute to say, “Okay, What should I do? Which way should I go?”

Along with the presidential, I paid attention to the amendments, and I studied those really hard to make sure I chose correctly. Especially for the one with family members in the military, making sure they are able to reap the benefits of their spouse if they were to pass away. That one really meant a lot to me because my dad fought in the Vietnam War.

Now that I’ve voted, I’m still nervous. Because where I live, it’s a lot of people saying, “Oh, if Trump wins, it’s gonna be a riot. If Biden wins, it’s gonna be a riot.” And I got kids, I can’t afford it. I just I don’t understand why there has to be a riot. I mean, it’s just crazy. I know I shouldn’t say this, but I did: I voted for Biden. I really feel like he’s gonna make sure me and my kids are gonna be okay in the end. And so I’m really praying that this works out.

“People learn from mistakes. At least most people do. We’re not in control over a lot of stuff that happens.”

To the Florida lawmakers who created these restrictions on voting, I would tell them I understand that the law is the law. And for us to have these fees, we have to have broken some type of law. But that’s not who we are. People make mistakes. People learn from mistakes. At least most people do. We’re not in control over a lot of stuff that happens. But it’s okay to give people a second chance, a chance to try to right their wrongs.

I’m wearing my voting sticker proud right now. (Laughs.) And I’m not gonna lie, as I sit here talking to you, to even be able to fathom that my experience means something to somebody else, or it can help somebody, I’m in tears, it means so much to me. And I am so happy that I was able to share the experience with my kids. To everyone that was put in place along the way to help me vote, I am so grateful for each and every one of them. And I just hope that everyone that has been given a second chance to let their voice be heard, I pray they do it and stand proud, because I am.