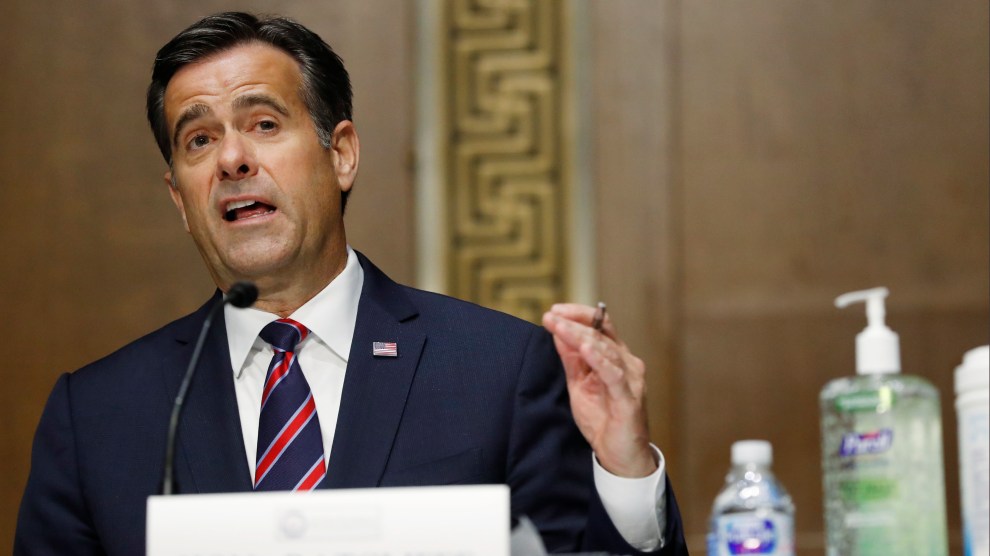 Reports circulated yesterday that the Proud Boys—or at least people claiming to be in the violent far-right hate group—were emailing voters and pressuring them to vote for President Trump. The evidence that the emails were actually sent by the Proud Boys was pretty thin, and tonight the US officials announced that it was, in fact, an Iranian election interference operation targeting Democratic voters in multiple states.

The news, announced by Director of National Intelligence John Ratcliffe and FBI Director Chris Wray in an ad-hoc news conference Wednesday night, included the additional revelation that both Iran and Russia had “obtained” US voter registration data, although further details remain unclear.

“We have confirmed that some voter registration information has been obtained by Iran and separately by Russia,” Ratcliffe said. “This data can be used by foreign actors to attempt to communicate false information to registered voters that they hope will cause confusion, sow chaos, and undermine your confidence in American democracy.”

The emails that appeared to be sent from the Proud Boys warned recipients to “vote for Trump on Election Day or we will come after you.” The messages were “designed to intimidate voters, incite social unrest, and damage President Trump,” Ratcliffe said Wednesday, without elaborating on how the messages would damage the president. Vice News reported earlier in the day that some of the emails also apparently included a video claiming to show hackers manipulating ballots. Ratcliffe said the claims in this video “are not true.”

While the extremist group has publicly championed President Trump—and he has told them to “stand back and stand by“—Proud Boys chairman Enrique Tarrio, who is also the Florida state director of a pro-Trump Latino group, almost immediately denied any Proud Boys involvement in the emails when news broke on Tuesday. Vice News quoted Tarrio as calling the email campaign a “fucking bold face lie” on Parler, a social media platform popular on the political right. “Whoever did this needs to rot in prison,” he said.

Many questions remain about what exactly the US intelligence community has uncovered. In addition to the claims that Iran’s efforts supposedly damage Trump, voter data is publicly available in some states and the officials did not elaborate during the press conference on what it means that Russia and Iran obtained some voter registration data. The Washington Post reported Wednesday that the officials’ suggestion that hackers obtained “privileged data, and also possibly penetrated electronic systems to detect how people were voting” was perhaps an attempt to “create the appearance of an election breach.”

John Hultquist, the senior director of analysis for Mandiant Threat Intelligence, a cybersecurity firm, said in a statement after the press conference that the news “marks a fundamental shift in our understanding of Iran’s willingness to interfere in the democratic process.” He noted that “while many of their operations have been focused on promoting propaganda in pursuit of Iran’s interests, this incident is clearly aimed at undermining voter confidence.”

A spokesperson for the Department of Homeland Security’s Cybersecurity & Infrastructure Security Agency declined to answer additional questions Wednesday night. An FBI spokesperson referred questions to the Office of the Director of National Intelligence, which declined to comment further.