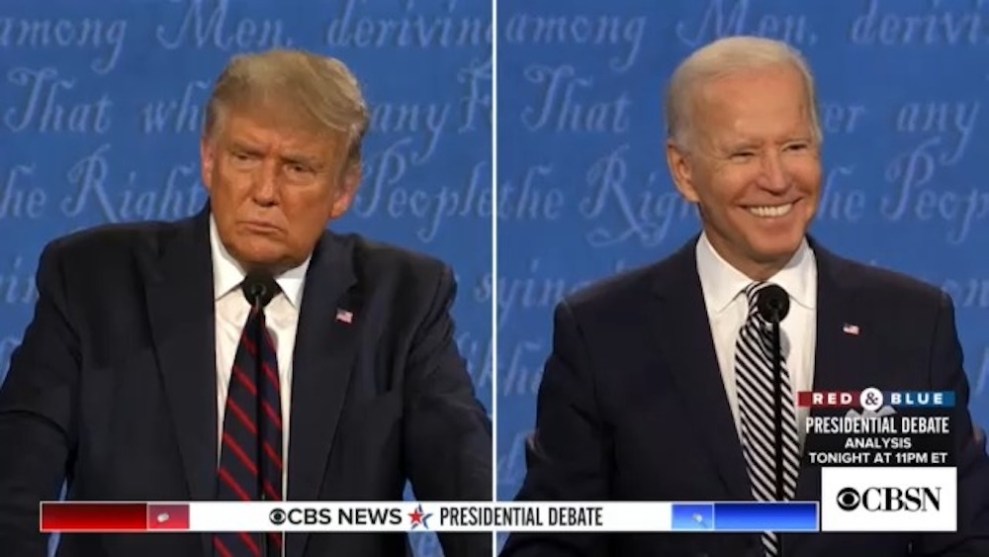 Last night there was a presidential debate between Joe Biden and Donald Trump. It was a real circus because Trump refused to follow the rules and ranted and raved like an unmedicated lunatic. Thanks to his chaotic rampage, the conversation was hard to follow. Very few issues were debated in a way that happens in The West Wing. And the second it was over, everyone on television proclaimed it a mess. “Who was the winner? No one,” was a regular refrain. “The only thing I know is America lost,” I heard someone say on Fox. This morning, several newspapers led coverage with a bit of both-siderism.

This is nonsense. It was clear in the debate that there was a winner, and that winner’s name is Joe Biden. Donald Trump did what Donald Trump does: He bullied and hectored and rambled and ceaselessly interrupted. Liberals don’t trust their own senses sometimes: There is a nagging suspicion that although we see a volcano erupting and feel the heat on our face as the lava flows toward us, it might not “play that way” to the other villagers around this mountain. Too many times before, we think, this volcano erupted but our screams were dismissed. And so everyone watched last night and many people thought “no one won.” But that’s not true, and it was immediately born out by polls that showed Trump had disappointed even his supporters and that Biden gained in all demographics on all issues.

People are very bad at guessing what other people think when they stop thinking they’re like other people. Don’t go too far with it. Don’t think everyone has your exact taste or ideology, but you can assume other people also don’t like lava. There are some who do like lava. Pyromaniacs and other lava-fetishists. But they’re not a majority. Far from it.

And so Trump, the lava, he flows, as he does, and people panic that everyone will jump into the lava, but Trump has never been popular. His most popular is when he’s shut his mouth and let people forget that he is his irrepressible self.

Maggie Haberman of the New York Times observed last night that Trump’s rambling was reminiscent of his daily coronavirus briefings in the spring. Absolutely! I had flashbacks to those briefings. But the interesting thing about them is they were a disaster for Trump politically. People do not like his ranting. They do not like it on a train, they do like it in the rain. Some people do! Some people go to the rallies and love it! But not many. And not enough to save him.

I can’t stop thinking about the conventional wisdom that the debate was a “disaster.” I don’t think that’s true. Both candidates showed up and were exactly who they are. They didn’t paper themselves over in rehearsed speeches. They were there for the world to see. Is that not more informative than if Trump had taken, say, Ritalin and, for the first time in his life, kept himself in control? What would that say about the man who’d be president for four more years? Not much. There are people who watched and think “This Trump guy is for me!” And those voters should vote for him. There are also people, I suspect in far greater numbers, who did not feel that way, but instead felt, as one focus group participant told Frank Luntz, that Trump acted like “a crackhead.”

“But polls showed Hillary won the debates against Trump too, and she still lost!” This is true! If James Comey sends a letter opening an investigation into Joe Biden, all bets will be off.

That doesn’t mean Biden won the election last night. Of course it doesn’t. Time moves forward and things happen and they change the course of everything. Last night doesn’t mean everyone should pop champagne and forget to vote. Nothing will or could mean that, but it does mean Biden won the debate and Trump fell further behind, squandering one of his final opportunities for a comeback. More opportunities will come, but never again as many as there were before those two walked onstage last night and showed us exactly who they are.