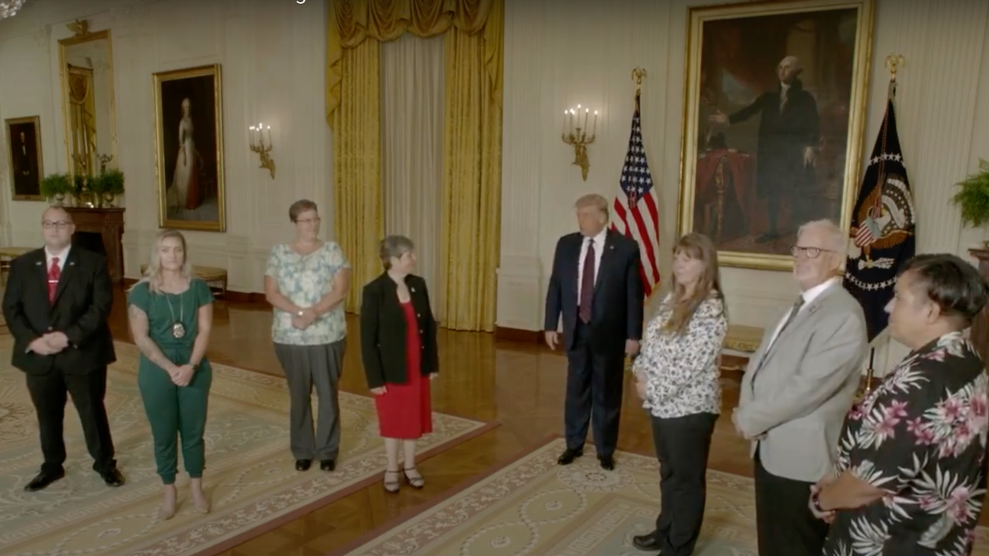 President Donald Trump doubled down on xenophobia and misinformation about the coronavirus during his first appearance during the Monday night broadcast of the Republican National Convention. During the short, stilted interaction filmed at the White House, Trump, surrounded by seven unmasked people with their hands clasped in front of them, attempted to talk to ordinary people.

“These are my friends,” he said, as one does. “These are the incredible workers who helped us so much with the COVID.”

He then asked asking the group to tell “their stories,” which mainly meant listing their professions: postal worker, post office custodian, nurse.

“How about you?” he said, turning to a goateed man.

Throughout the appearance, Trump referred to the coronavirus using a racist term: “We can call it many different things, from China virus, I don’t want to go through all the different names, because some people might get insulted, but that’s the way it is.”

After a registered nurse thanked Trump for his leadership and added, unironically, that she admired him for “not [being] offended by all the words being said” about his coronavirus response, Trump replied “I’m for the nurses, I’m for the doctors, I’m for everybody—we just have to make this China virus go away, and it’s happening.” More than 177,000 people in the United States have died of COVID-19 so far, and the number of new deaths per day are still climbing in some places.

When a sheriff’s deputy who works in a California jail mentioned he had recovered from COVID-19, Trump asked what had been done for him.

“They gave me Zpacks, medication, cough syrup,” the deputy replied.

“And I won’t even ask you about the hydroxychloroquine—it’s a shame what they’ve done to that one—but I took it. I took the z pack also. And zinc!” the president replies.

No matter how much Trump touts hydrochloriquine, it doesn’t change the facts: The Food and Drug Administration warns against administering hydroxycloroquine for COVID-19 outside a hospital setting. On Friday, the Infections Diseases Society of America revised its guidelines to say the anti-malarial drug should not be used to treat coronavirus patients, even in hospitals.

Meanwhile zinc’s protective effects against the coronavirus are “unknown,” according to the National Academies of Sciences, Engineering, and Medicine. “Studies suggest zinc may slow the ability of viruses to make copies of themselves inside your body,” the academies say. “But there has not been enough research specifically on how zinc affects coronaviruses.”