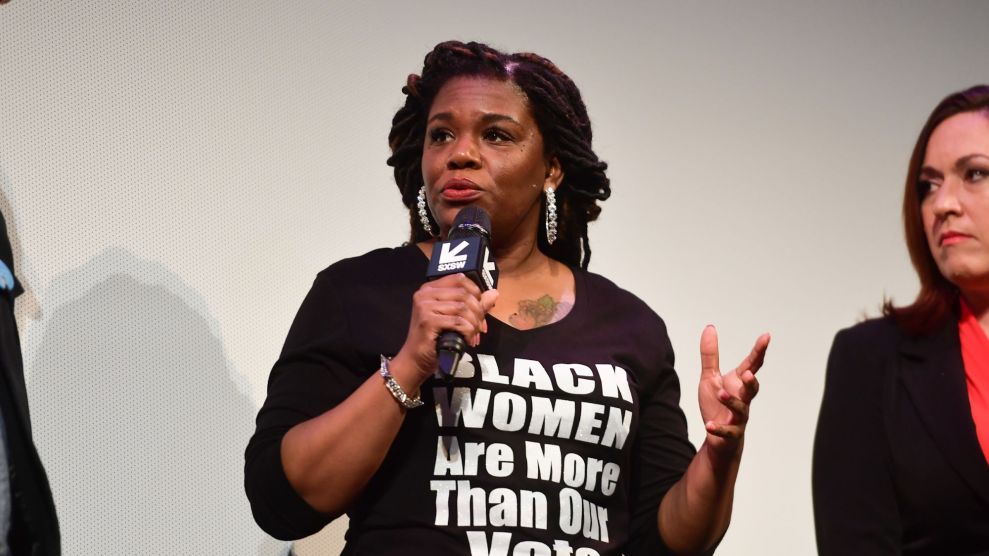 In a stunning upset, Black Lives Matter activist Cori Bush has defeated 10-term incumbent Rep. Lacy Clay in the Democratic primary for Missouri’s 1st Congressional District, according to the Associated Press. Bush, a minister and registered nurse, has been heavily involved in protests against police violence since the 2014 Ferguson protests. Mother Jones‘ Kara Voght wrote about the race last week:

For 400 days in 2014 and 2015, protesters gathered in Ferguson, Missouri, to register their outrage over the police killing of unarmed Black teenager Michael Brown. For most of those days, Bush joined them—at first, in her capacity as a registered nurse to tend to protesters’ injuries, and later as a community organizer on the front lines. She went out again in 2017 to organize after another white police officer was acquitted of murder in the 2011 shooting death of a Black man during a car chase in north St. Louis. This year, as Americans across the country protested Floyd’s killing, a white police officer in the St. Louis suburb of Florissant—Bush’s hometown—ran over a Black man with his unmarked SUV before getting out of the car to repeatedly kick him. And so Bush and her fellow Ferguson activists organized yet another demonstration against police brutality. During a June gathering, she tweeted that she had been pepper-sprayed in the eyes by the cops.

The race features two Black leaders with very different ideas about how to create change. Clay is a consummate insider who has spent decades building political power, which he has used to secure tangible, if incremental, progress on issues including police abuse. Bush, who is also an ordained minister, has little patience for incremental measures. She believes the district that helped turn Black Lives Matter into a national movement should have an activist in its congressional seat, someone who stands unwaveringly with BLM’s demands.

Bush has also slammed Clay’s coziness with corporate interests. Three-quarters of the nearly $750,000 Clay raised through June of this year came from political action committees, nearly 80 percent of which are backed by big business. His top campaign contributor is Quicken Loans, a mortgage giant that Clay is charged with overseeing from his perch on the Financial Services Committee. In 2015, the Justice Department sued Quicken for originating hundreds of home loans for borrowers who weren’t eligible for them. (The company agreed to pay $32.5 million to settle the case without admitting wrongdoing.)

Clay maintains that his fundraising has no bearing on how he votes. But Fight Corporate Monopolies, a progressive group, placed a six-figure television ad buy to revisit an episode in which Clay sided with financial services companies to fight against a rule that would force investment advisers to act in their clients’ best interests.

You can read the full story here.