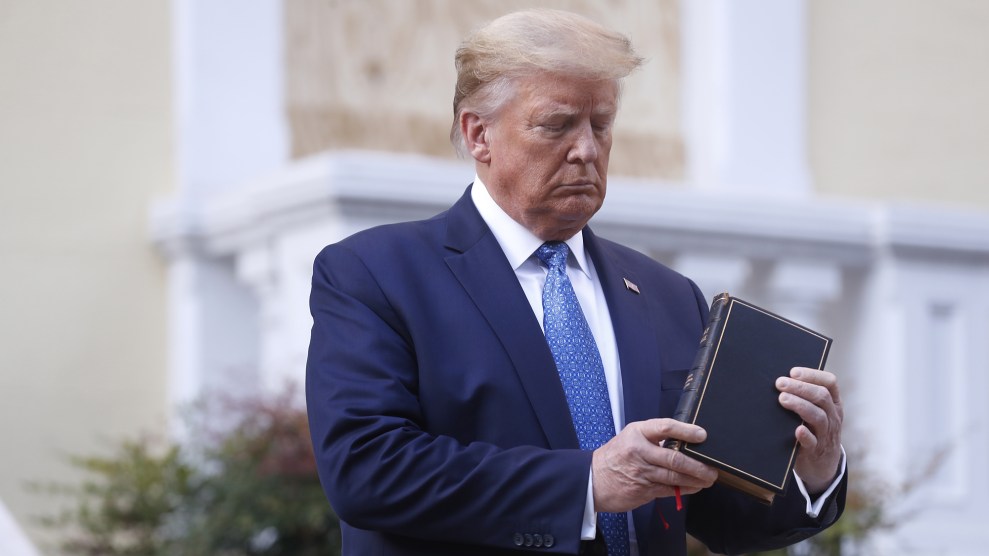 On Tuesday, Priorities USA Action released a TV ad in swing states attacking President Donald Trump’s handling of both the coronavirus pandemic and the protests sparked by the police killing of George Floyd. The Democratic-aligned super-PAC’s ad ends with the now-infamous image of Trump holding a bible upside-down outside of St. John’s Church by the White House. If the Trump administration hadn’t tear gassed peaceful protesters in order to take this photo, it might now be appearing in Trump’s own ads—it was, after all, the product of a photo op engineered by his own team. But the image, as Priorities sensed, has instead become a symbol of Trump’s failure.

Before releasing the ad, Priorities tested it with an online panel, finding that it moved voters away from Trump and toward Biden. “Trump’s photo op, and the violent clearing of the peaceful crowd that made it possible, is the perfect example of Trump’s failed leadership and the damage it’s doing to our country,” Priorities spokesperson Josh Schwerin wrote in an email.

But Priorities might not have known just how damning the photo-op really was until Wednesday, when data was released that bore out their hunch. This week,  Navigator Research released polling that, among other lines of inquiry, asked people if their impression of the photo was positive or negative: 41 percent approved, versus 59 percent who disapproved.

The poll also found that only 23 percent of Americans agreed with the tear-gassing of protesters before the photo-op, meaning that even a majority of Republicans disapproved. “I’ve asked a lot of Trump approval questions on a lot of different things that he’s done, said, tweeted, whatever, for four years,” says Bryan Bennett, polling director at the Hub Project and an advisor on the Navigator poll. “I’ve never seen a single time when Trump was below 50 percent approval among Republicans on anything. It really was a stunning result.”

The Navigator poll showed that the opposition to the tear gas incident was indicative of a larger pro-demonstrator trend: 68 percent of respondents supported the protests. Majorities also believed that the killing of George Floyd and other recent events are indicative of broader racial problems in policing and that Trump is not equipped to handle issues related to race. In fact, they believe he’s making it worse.

When the protesting started and Trump began regularly tweeting the phrase “Law & Order!” it seemed he believed that, much like Richard Nixon did in 1968, he could win a presidential campaign by quelling upheaval for a “silent majority” who disapproved of social unrest. But recent polling shows that Trump—who, after all, is the incumbent—is seen as part of the problem, not the solution.

Trump—who, after all, is the incumbent—is seen as part of the problem, not the solution.

A majority of respondents to Navigator’s poll, conducted by the Global Strategy Group and GBAO Strategies under the umbrella of the liberal Hub Project, said they did not trust Trump to improve race relations or hold police departments accountable. Further, 54 percent believe race relations have grown worse under Trump; only 15 percent say they have improved. While Trump tweets about law and order, only 39 percent actually believed he stood for these principles.

Other polls have captured similar findings. Priorities’ own polling, released Wednesday, found that racial justice and police misconduct had become one of the most important issues to voters, and that 64 percent of them believed Trump was exacerbating tensions. It’s unsurprising that the poll also showed Trump losing to Joe Biden—though the Electoral College and the way it puts massive influence in a hands of a few states means the race remains close.

Despite the signs that Trump’s tactics have backfired amid a surge of sympathy for the protesters, Trump has doubled down on a politics of white grievance, most recently by going out of his way to support monuments and military facilities that honor Confederates. According to Navigator, this isn’t a clearly popular position anymore: 43 percent support removing such monuments and 44 percent want to keep them up.

While the poll found that attitudes on police brutality toward people of color have shifted significantly, Americans—particularly white Americans—are compartmentalizing this awakening. Tellingly, 74 percent of respondents said that Floyd’s death reflected a broader problem in policing rather than an isolated incident, including 71 percent of white people and a majority of Republicans. Smaller majorities said the same of the deaths of Breonna Taylor, who was shot by Louisville police in her own apartment, and Ahmaud Arbery, killed by a white man in Georgia while jogging. But just 45 percent of respondents believed that Amy Cooper’s racist threats against birdwatcher Christian Cooper in Central Park were indicative of a broader problem, including just 40 percent of white respondents and 27 percent of Republicans. It’s one thing to acknowledge racism in police departments; but the Amy Cooper incident revealed a pervasive racism among white Americans that their peers may not yet be ready to accept.

Navigator also tapped into a deeper tension that will play out over the next five months leading up to the November elections. Remember, while 59 percent of respondents had a negative reaction to the Bible photo, among Republicans the approval was 78 percent—closer to the level of support the president’s actions typically receive from members of his own party.

Those numbers make the poll’s findings about opposition to the tear gas incident among Trump’s own base all the more remarkable. “I think there’s still a bit of a tension between Trump versus the things that he’s doing,” says J. Isaiah Bailey, associate polling and analytics director at The Hub Project. “You can directly point to some things that Trump is doing, and even his people are like, ‘I don’t like that.’ I think that is going to be a very interesting tension for us to continue to pay attention to.”

Despite the indications that the tear gas incident is a serious vulnerability for Trump, the president is not backing down. On Thursday, he tweeted praise for how soldiers, who were well-equipped and participated in an action where chemical agents were deployed, had managed to “easily” clear out peaceful and unarmed protesters, portraying them as a dangerous group.

Our great National Guard Troops who took care of the area around the White House could hardly believe how easy it was. “A walk in the park”, one said. The protesters, agitators, anarchists (ANTIFA), and others, were handled VERY easily by the Guard, D.C. Police, & S.S. GREAT JOB!