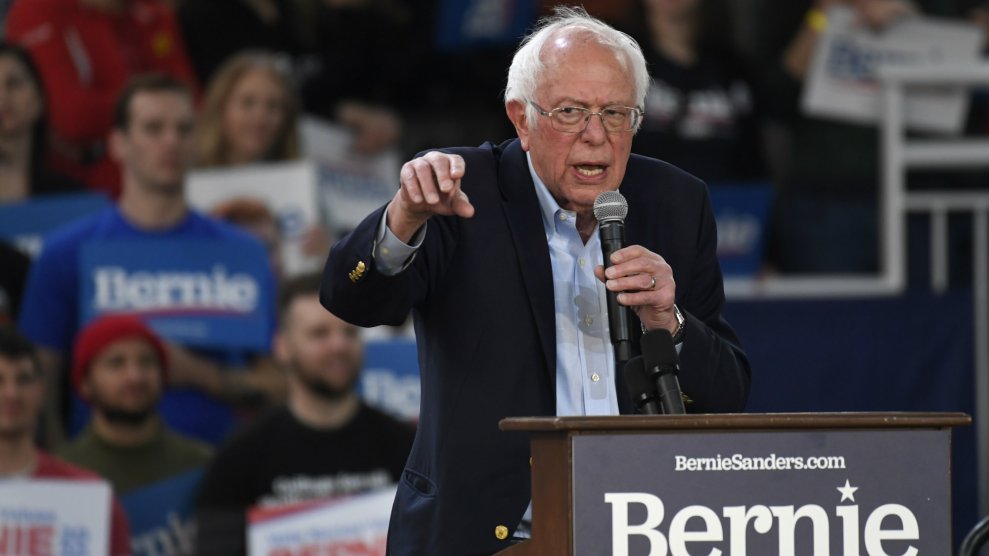 Hours after billionaire politician Michael Bloomberg tried to convince a posh Northern Virginia hotel conference room full of women to vote for him, Vermont Sen. Bernie Sanders held his own rally a few miles down the road.

Upwards of 10,000 people attended Sanders’ event, held at sports complex in Springfield, compared to the several hundred who mingled and tepidly cheered for Bloomberg in the morning. A reggae band warmed up the crowd before a slew of Sanders campaign surrogates—including Rep. Ilhan Omar (D-Minn.)—took to the stage and delivered fiery messages. “I want Bernie to be angry because we have a lot to be angry about,” Omar said, making a dig at the media’s frequent hand-wringing over Sanders’ demeanor, and his campaign’s extremely online supporters. “The fact that we spend so much money on militarization and don’t have enough money to feed our kids, house people, educate our children, provide medical care for people who are sick in this country. Now if you have someone running for office that is not angry about that, they don’t represent you.”

The biggest difference between the two rallies became apparent when I talked voters about why they were there. At Bloomberg’s “Women for Mike” event—which was comprised of mostly older, white women—every person I spoke with said they were supporting Bloomberg because they were single-issue voters who just want to see Trump out of office, and believe the former New York City mayor is the only candidate with the resources to do so. At Sanders’ rally—which was a far more multicultural and younger affair—people told me they were supporting the Vermont senator for a variety of reasons. Many cited Medicare for All as their chief concern, but others told me it was Sanders’ position on issues like his support of the Green New Deal, ensuring a tax on the top 1 percent of earners, and wiping out student debt as reasons why they’re supporting Sanders.

Though a recent poll of the state has Biden in the lead, Sanders still leads FiveThirtyEight‘s average of polls in the state, with Bloomberg in striking range. Much of Virginia’s suburbs, like Springfield, are filled with more moderate Democrats, who might not be rushing to the ballot box to vote for Sanders. But, as he has in other states, Sanders’ campaign is banking on a huge turnout in working class voters who haven’t always felt represented and shown up to the ballot box. Del. Lee Carter, the state’s only socialist lawmaker who was elected in 2017 to represent a formerly deep-red district not far from Springfield, told the crowd that he has faith that people will turn out the vote. “There are millions of people throughout this country in urban areas, rural areas, and suburbs that don’t feel like they have a voice in our politics,” he said.