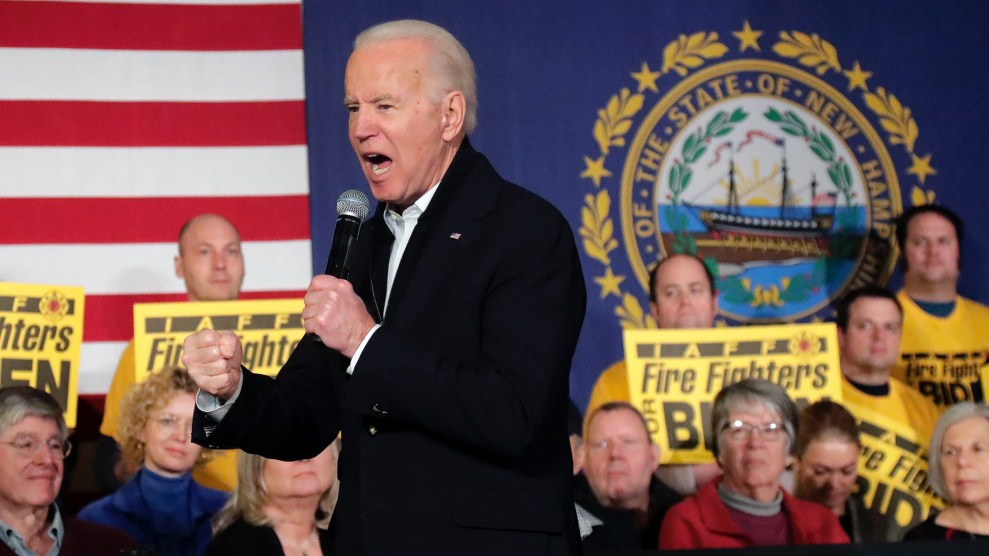 Former Vice President Joe Biden clenches his fist as he speaks at a campaign event in Somersworth, New Hampshire, on February 5, 2020.Elise Amendola/AP

Joe Biden hasn’t exactly been bringing the heat to the campaign trail, enjoying his (mostly) uncontested frontrunner status by relying on forgettable debate performances and his signature affectionate style of retail politics. But credit where credit is due: On Wednesday, he was on fire. (Or, at least, you know, relatively speaking—think of it like a small Boy Scout camp fire.)

Biden had a lot to prove to the mostly white, mostly over-50 crowd who stuffed into a union hall in Somersworth, New Hampshire, on Wednesday afternoon. With the partial results still trickling in from the Iowa  caucuses, it seemed likely that the Biden campaign failed to hit even the lowest expectations it had set for the nation’s first contest: It had aimed for third, and as things stand, it will likely land in fourth.

“We took a gut punch in Iowa,” Biden conceded as he began, lamenting that the caucus process did, too. “But this isn’t the first time in my life I’ve been knocked down.”

The rest of his speech suggested the way he’s getting back up is by knocking down Iowa’s apparent top finishers, Bernie Sanders and Pete Buttigieg.

The former VP didn’t linger long on his accomplishments in the Senate and Obama White House before pivoting into attack mode. He first turned his attention to Sanders, reminding the crowd—as he has before—of the Vermont senator’s failures to back gun control legislation in the 1990s. He then moved into an electability argument as he took note of Trump’s “socialist” scare tactics and the fact that Sanders self-identifies as one. “We need a nominee who can help Democrats up and down the ticket,” Biden reasoned, “but if Senator Sanders is the nominee…every Democrat will have to carry the label that Senator Sanders has chosen for himself.”

He then moved onto Buttigieg, weaponizing the former mayor’s claims that Biden is out of touch. “Mayor Pete likes to call me part of the ‘old, failed,’ Washington,” Biden said. He took on “failed” first, listing out accomplishments like the Affordable Care Act and the Paris climate agreement. “Is he really saying the Obama-Biden administration was a failure?” Biden jabbed, “Pete, just say it out loud.” (Never mind that in the closing days of Iowa, as my colleague Tim Murphy recently wrote, Pete was really leaning into a whole consider-me-the-next-Obama thing.)

And as for “old”: “Yeah, that was a long time ago—three years ago,” Biden said, the crowd erupting in laugher and applause when the vice president hit the (admittedly mild) punchline.

For some attendees, seeing Biden in this form helped him pass a sort of sniff test. New Hampshirite Paul Turner, who was watching on Wednesday, told me he considers himself “very liberal,” but feels like Biden is the right candidate for “the conditions we’re in.” The trouble was, he hadn’t seen Biden show the energy he wants to see in the candidate that will take on Trump. “He appealed to me, but I needed to him to liven it up a little bit more,” Turner said. “I’m really happy to see him get more fired up—he fired me up.”

Wanda Huffmann of Dover, New Hampshire, echoed Turner’s feelings. “I always thought I was going to vote for Joe just because of experience,” Huffmann explains. “I hate to say this, but I wanted to see how much passion Joe had—how much oomph does he have? He did it at the end and impressed me.”

On the way out, he ignored reporters’ questions asking why he decided to take a negative tack. But it’s clearly part of a new concerted effort: A tweet mirroring his language in Somersworth landed online as he spoke.

Mayor Pete likes to call me part of the old failed Washington. Was it a failure when I helped pass Obamacare, the Paris Agreement, the Violence Against Women Act, or the assault weapons ban?

I have a stronger record of passing big, progressive legislation than anyone running.