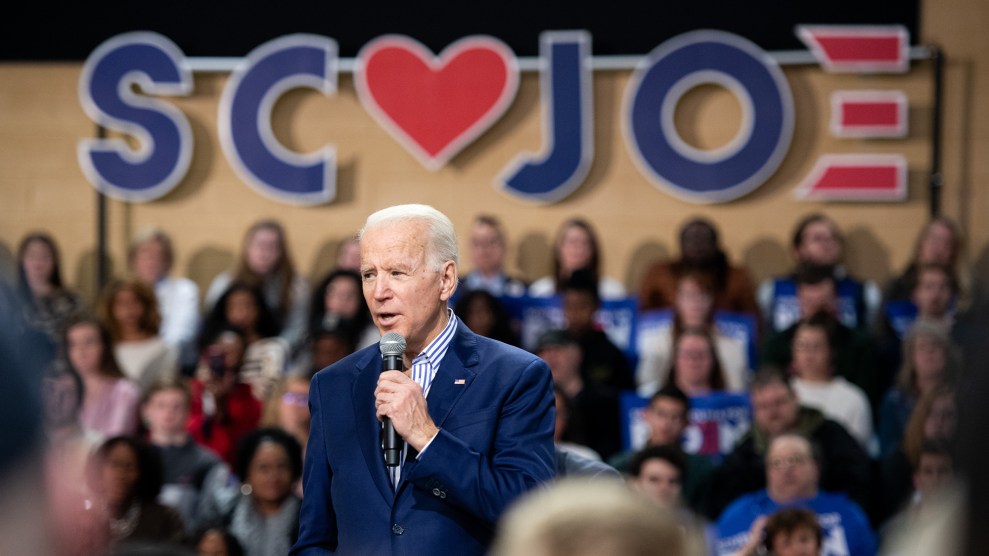 Joe Biden won the South Carolina Democratic primary on Saturday, breathing life into the former vice president’s campaign after he’d bombed out of Iowa and New Hampshire and seen his polling wobble in the Palmetto State.

It was at least in part a vote for pragmatism, moderation, and strategic calculation. Although Biden has a devoted constituency in the state, across South Carolina I spoke with people looking to pick a candidate who would go on to defeat President Trump—people essentially turning themselves into pundits, trying to game out who is and isn’t electable. Nobody in the Democratic primary benefits more from the punditization of voters than Biden.

According to exit polls, Biden won every demographic polled except 18- to 29-year-olds and voters who had never attended a religious service, both of whom preferred Bernie Sanders, who came in second place. Biden’s win was propelled by the support of 60 percent of African Americans, while he virtually tied Sanders among white voters.

The Biden campaign has leaned heavily on the premise that the former vice president is the most electable candidate with the best shot at unseating Trump. But nothing undermines the promise of electability like the reality of defeat. After coming in fourth in Iowa, fifth in New Hampshire, and a distant second in Nevada, even Biden supporters in South Carolina began to wonder if he was really the best person for the job. Polls showed Biden with a commanding lead in the fall, which dropped precipitously after his poor performances in Iowa and New Hampshire but then rebounded in the week leading up to South Carolina’s primary. Biden had a 15-point margin over Sanders in the Real Clear Politics average heading into primary day. The vice president had a strong showing at a chaotic debate in Charleston on Tuesday and won the endorsement of the state’s most important Democratic politician, Rep. Jim Clyburn, on Wednesday, whose support, exit polls show, convinced many voters previously on the fence to support Biden.

“I just want to make the right choice to beat our incumbent,” said Stephanie Rainey, 47, of Spartanburg. She was attending a Tom Steyer event with a friend the night before the primary, but she had narrowed her choice to Biden and Sanders. Again and again on the campaign trail, voters told me they were making the same calculation. Some worried that Sanders’ progressivism would render him unelectable, but many had begun to see his large crowds and fervent supporters as a sign that the democratic socialist from Vermont might in fact be in the strongest position to take on Trump.

Eloise Conyers, 64, has supported Biden the entire primary and planned to vote for him. As for her friends, she said at a Biden event in Sumter on Friday, “They want the person who will win, and that will be Biden or Sanders.” Bonnie, 65, a Florida voter who had just moved to South Carolina and attended a Biden rally on Thursday, said she was leaning toward supporting Biden. “Anybody who can get that pathological liar out of the White House,” she said, declining to share her last name. But then she wondered if Sanders might actually get the job done. “He attracts the same type of crowd as Trump,” she conceded.

At events across the state, voters wavered between candidates as they worked out the electability question for themselves. A large number of people remained unsure even in the final week. At a Pete Buttigieg event in North Charleston on Monday, Andrea Woodfield said she liked the young former mayor from Indiana, but that “my heart says we need Biden in South Carolina.”

The high expectations here for Biden were based on his longtime relationships in the state, including with the African American community. African American support propelled Barack Obama to a 30-point win in 2008 and gave Hillary Clinton a nearly 50-point win in 2016. But there were signs that the community that voted more as a bloc in previous primaries with fewer candidates had splintered this year, with seven Democrats on the ballot. Many younger Black voters turned to Sanders, and a significant portion of voters here went with billionaire Tom Steyer, who poured an estimated $18 million into television ads alone.

Those inroads were made in part because Biden’s campaign had taken Black support in the state for granted, according to many operatives. In a Black neighborhood of North Charleston, Rebecca Rushton, 51, pointed out a Biden campaign office but said she hadn’t ever encountered Biden canvassers in her neighborhood. At a Steyer event in Columbia on Friday, Robert Donald, 63, said he was supporting Steyer over Biden in part because “I don’t like the idea of other people selecting who I vote for.” Steyer had put in the work, he felt, and Biden hadn’t.

Whatever Biden may have lost in African American support, however, he might have made up for among South Carolina’s moderate white Democrats, as well as independents and Republicans who can vote in the state’s open primary. Wealthier suburbs across the country have moved toward the Democratic Party since 2016, propelled in part by more moderate and conservative women who dislike Trump. South Carolina is no exception. In 2018, Democrat Joe Cunningham won the South Carolina congressional district that runs along the state’s coastline with suburban voters in Charleston and Myrtle Beach. Trump had carried it two years earlier by nearly 13 points. Democratic strategist Tyler Jones, who worked on Cunningham’s campaign, predicted that these same voters would play a larger role than before in South Carolina’s primary and would largely go for Biden. “With Joe’s race, we won that seat because we brought in new voters who were repulsed by Trump and were willing to vote for a reasonable mainstream Democrat,” Jones told Vanity Fair this week. “We still have those voters. It’s the first time we have had them since 2006, and they will be voting on Saturday in South Carolina.”

With Super Tuesday just three days away, Biden won’t have much time to bask in his victory or build momentum. It will become clear whether South Carolina will launch Biden’s comeback, positioning him as the main obstacle to Sanders—or whether Biden will remain mired in a messy, crowded field from which only Sanders has figured out how to emerge.